I Agree
What is a DUI and DWI in Oklahoma? | OklahomaCourtRecords.us
Oklahoma Court Records

What is a DUI and a DWI in Oklahoma?

In Oklahoma, DUI and DWI are traffic infractions involving excessive use of alcohol or other intoxicating substances. DUI (Driving Under Influence) and DWI (Driving While Impaired) are treated as separate offenses in the state according to the blood alcohol content (BAC) of the offender. BAC of 0.8% or more is DUI, while BAC below 0.8% is DWI.

The Department of Public Safety (DPS), through the Oklahoma Highway Patrol, deals with patrolling and arresting flouters of road traffic laws. Guilty parties can be punished with a suspension of driver’s licenses and may need to complete an Alcohol and Drug Substance Abuse Course (ADSAC) assessment usually carried out by the Oklahoma Department of Mental Health and Substance Abuse Services (ODMHSAS).

DUI means “Driving Under the Influence,” and it refers to driving, operating, or having physical control of a vehicle while under the influence of alcohol. Following 47 O. S. § 756, blood or breath alcohol concentration (BAC) greater than 0.08 or other recreational drugs or stimulants (as defined by 63 O. S. §2–204) capable of intoxicating within two hours of arrest is a DUI. DWI “Driving While Impaired” implies there is a BAC over 0.05 but less than 0.08. DUI is a felony, while DWI is a misdemeanor or a civil infraction if there are no fatalities or for first-time offenders. Blood aside, other samples that can be assessed to determine intoxication levels include urine, breath, or saliva.

What happens when you get a DUI for the First Time in Oklahoma?

A DUI attracts a two in one charge; the first is the criminal charge (at the district or municipal court) against driving under the influence. The second is a civil action administered to revoke or suspend the offender’s license. The criminal charge is like every other court trial starting with an initial hearing, a pretrial, the trial, and the verdict. The DPS is in charge of conducting an administrative hearing upon the offender’s application and must be conducted within 15 days of the request. When a request is not made, it could lead to forfeiture of license for up to 6 months. Other possible judgments include ten days to one year in jail and a $1,000 fine.

How Likely is Jail Time After a First DUI in Oklahoma?

Not likely. Jail time for a first DUI offense in Oklahoma depends on the circumstances surrounding the case, such as the parties involved (for example, a minor) and the offender’s criminal and traffic law history. First-time offenders commonly face court-ordered penalties, including fines, alcohol education or therapy, driver’s license revocation or suspension, and community service (between 30 to 80 hours).

What are the Typical Penalties for a DUI Conviction in Oklahoma?

Punishment for persons convicted of DUI in Oklahoma includes one or a combination of fines, license revocation, installation of an ignition interlock device on vehicles owned or registered in the offender’s name, community service, and jail time. First-time offenders will use the interlock device for about one and a half years, second-time offenders for four years, and any subsequent convictions will have the device for five years.

License revocation is another penalty for impaired driving offenses, which is possible if an impaired driver fails or refuses a breath test at the point of arrest. Nevertheless, the driver can challenge this in an administrative ruling, but, if futile, the license will be suspended for at least six months.

Prison sentencing occurs after a trial. First-time DUI felons can expect one to five years of jail time, fines of about $2,500, and one year revocation of a license if the license was previously revoked within the last decade. Second and subsequent charges carry jail time ranging from one to ten years, about $5,000 for fines, and automatic revocation of license for three or more years if the previous license revocation has occurred two or more times in the past decade.

How Long Does a DUI Stay on Your Record in Oklahoma?

A DUI will stay on a record until the bearer files a motion for expungement. To expunge a DUI from a driving record, the defendant will have to request an administrative license hearing. The court will only honor requests made within 30 days of the arrest. If the 30-day window elapses, there will be an automatic suspension of license for at least six months, which will be registered in the defendant’s driving record as well.

The court usually defers sentences for first-time offenders until such individuals complete the probationary period. Upon completion, the judge can change the case’s disposition and dismiss the case. Following Oklahoma Statute Title 22, Subsections 18/19, to expunge the records, a lawyer will request expungement at the court.

How do I Find DUI Checkpoints in Oklahoma?

Checkpoints are created at predetermined areas to permit law enforcement officers to check if drivers are impaired or not. Vehicles can be halted at intervals for a check to keep impaired drivers off the road. The purpose of these checkpoints is to prevent driving after drinking. The Oklahoma Sobriety Checkpoint Finder is a great tool that allows citizens to access traffic safety countermeasures, publicized checkpoints, and publicized patrol teams.

Which is Worse; a DUI or DWI?

DWI is a lesser offense to DUI in Oklahoma. In a DUI case, the driver gets a license suspension once arrested. In a DWI case, the driver only gets a license suspension if found guilty. After settling the fines, a driver convicted of driving under the influence (DUI) must install an ignition interlock device on each vehicle registered under that driver.

What is an Aggravated DWI in Oklahoma?

There is no aggravated DWI in Oklahoma and what is obtainable is aggravated DWI. Aggravated DUI refers to the situation where the blood or breath liquor concentration is 0.15% or higher as at the time of the arrest. Following the Oklahoma Department of Public Safety. for a first-time offender, the period of revocation is around half a year. A second time offender within the space of 10 years gets a year or more period of revocation. A third-time offender, within ten years, gets three years or more time of revocation. Additional punishments may require mandatory in-patient alcohol treatment for 28 days, alcohol checks during the probation period, and 480 hours of community service.

What Happens When You Get a DWI in Oklahoma?

In Oklahoma, a DWI offender can get six months of sentencing and a year for third and subsequent offenses, and a fine between $100-$500. Anyone found guilty of DWI or pleading guilty will have to take an alcohol and drug assessment and evaluation test before sentencing.

According to the State of Oklahoma Highway Safety Office, another penalty for impaired driving is License revocation. If an impaired driver refuses a breath test, the driver’s license is confiscated right away. 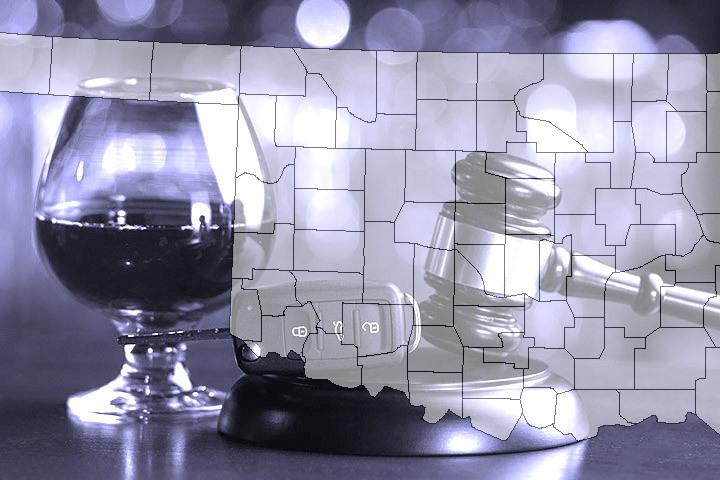