What Are Oklahoma Traffic Court Records?

Oklahoma traffic court records refer to all legal documentation, including transcripts and logs from traffic court proceedings within the State of Oklahoma. These also include case files, evidence notes and other pertinent records regarding the adjudication of moving and non-moving violations under the motor vehicle code of the state.

All records of proceedings from traffic court in Oklahoma are identified as public records, available to be reviewed by members of the general public under the public access to information law. Records that have been restricted from public access by a court order or the law are exempt from this.

Getting a Traffic Ticket in Oklahoma.

Getting cited for an Oklahoma traffic violation and infraction by a law enforcement officer, will result in you being issued a Uniform Violations Complaint ticket. This is a legal document that serves as a complaint and charges you with violating the traffic statutes/ordinances in Oklahoma. It represents a complaint, by the officer, against the defendant and a sworn statement regarding the incident as observed by the officer. The ticket will indicate which court (district or municipal) that you are being charged in. It will indicate the date, time and location of the alleged incident. It will list the defendant’s name, address, and other required bio-data. The defendant’s driving license details will be noted as well as the vehicle particulars. The offense/violation the defendant is accused of will be noted along with the statute/ordinance section he is accused of violating.

The officer will sign the ticket indicating his ID number and agency. A court appearance date, time and location will be recorded. The back of the ticket will contain details about responding to the ticket. Depending on the ticket that was received, a fine amount may be indicated on the ticket. If the box where the amount should be listed is marked “CRT” or “Court”, a court appearance is obligatory to respond to the ticket. If this is not the case, you will need to contact the clerk of the court indicated on the ticket to obtain the fine amount. Before receiving their own copy of the citation, defendants will be required to sign a “Promise to Appear”, which indicates the defendant is being released on their own recognizance (as opposed to on a bond) and acts as a promise to respond to the ticket appropriately or risk a license suspension.

Traffic fines and court fees vary by violation and court in the state of Oklahoma. Oklahoma employs a driver points system to monitor drivers’ habits. A conviction on a traffic violation will be reported to the Oklahoma Department of Public Safety (DPS) and points will be added on your record. If you amass 10 points or more on your record, within 5 years, your license will be suspended.

What to Do When You Get a Traffic Ticket in Oklahoma?

When you get a Uniform Violation Complaint ticket for a traffic violation in Oklahoma, you are required to respond to the ticket by the court appearance date indicated on the ticket or you could risk a license suspension or even a bench warrant for your arrest. Upon receiving the ticket, your options are:

If you wish to pay the ticket, note that this is an admission of guilt regarding the charges and will be recorded as a conviction. It is also regarded as a choice to waive rights to contest the ticket and acceptance of all fines and penalties. The conviction will be reported to the Oklahoma DPS and points will be added to your driving record. The plea must be entered, and fine paid, by the court appearance date or you risk additional penalties. You can either plead “Guilty” or “No Contest”. Pleading “No Contest” is similar to a guilty plea but it reserves your statutory rights. The ticket can be paid:

If you wish to fight the charge, you will need to appear in court on your assigned date and enter a “Not Guilty” plea during your arraignment. If you do choose to go this route, you will be required to pay a bond (total fine + $35) at the arraignment, which will be returned to you if you win the case. A date will be assigned for a pre-trial conference with the prosecuting attorney, where a plea bargain can be reached to avoid a trial. This usually involves you pleading down to a lesser charge. It is advisable to have an attorney present with you. If a deal is unable to be reached, then a trial date will be set. If you are found guilty at trial, then you will be assessed fines and other penalties, which you must settle. Your conviction will be reported to DPS and show up on your driving record. If you are found “Not Guilty”, then all charges against you are dismissed, as are fines and other penalties, and you will only be liable for court fees.

Depending on the nature of the violation and your driving history, you may have the option of completing a state-approved driving course to get the ticket dismissed and/or keep points off your record. You could also be mandated to attend one by the court.

If you miss any of your scheduled court dates, you will be charged with a “Failure to appear” which can result in additional fines, a license suspension or even a bench warrant being issued against you. If you are unable to appear for any of your dates, ensure advance notice is given to the court and the date rescheduled.

How Do I Find Oklahoma Traffic Court Records?

Traffic records are typically available at the Office of the Court Clerk for the traffic court in the jurisdiction where the case was litigated. You will need to appear physically to gain access to these files.

Additionally, publicly available records are accessible from some third-party websites. These websites offer the benefit of not being limited by geographical record availability and can often serve as a starting point when researching a specific or multiple records. To find a record using the search engines on these sites, interested parties must provide:

Third-party sites are not government-sponsored websites, and record availability may differ from official channels.

What information is required to obtain Oklahoma Traffic Court Records?

Are all Traffic Violations handled the same way, in Oklahoma?

Oklahoma state traffic violations are generally handled in the same manner, despite the offense you are cited for. The penalties and fines accrued will differ and be based on the statute or ordinance which was violated, but the procedures involved will be mostly the same.

Can Oklahoma Traffic Records be sealed or expunged?

How does one end up in an Oklahoma Traffic court?

You end up in an Oklahoma traffic court if you get cited for a traffic offense by a law enforcement officer and:

Either of these would require that you appear in traffic court.

Which Courts in Oklahoma have jurisdiction to hear traffic violation matters? 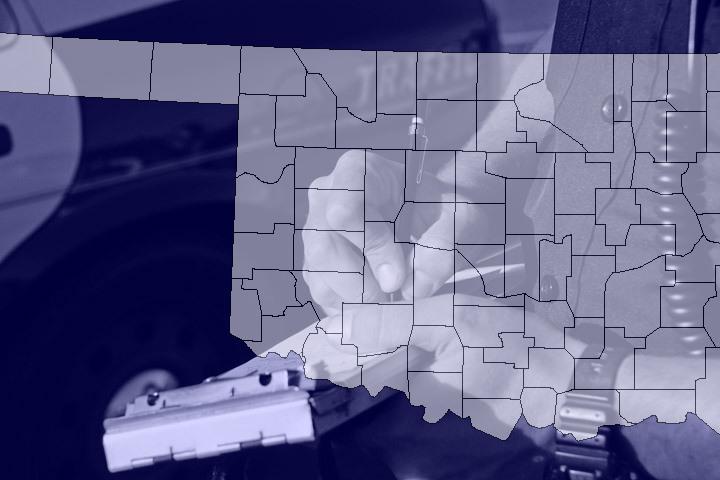