How are Divorce Records Generated in Oklahoma?

Divorce records in Oklahoma are classified as court or vital records which are issued by the state for the sake of documentation and preservation. There are 10.8 divorces per 1,000 women aged 15 years old and above in Oklahoma. The state runs both a fault-based and a no-fault divorce system. No fault divorce is granted if the couple is obviously not compatible due to irreconcilable differences. In filing for a fault-based divorce in Oklahoma, any of these legal grounds is acceptable;

A marriage in the State of Oklahoma ends in one of three ways:

A divorce is the total dissolution of existing marriage between a couple which means that the both parties are not under any legal bonds that makes them responsible to each other. In a legal separation, the couple remains married but they can live separately, the court will also divide marital property fairly. Annulment is a legal process whereby a marriage is declared null and void.

A divorce is finalized by the court when the judge signs a formal judgment indicating the date the marriage is dissolved and then, the final divorce decree is issued. Divorce records are documented and maintained by the Clerk of Court or the court’s records management office.

Are Divorce Records Public in Oklahoma?

Oklahoma divorce records are public and can be accessed by everyone. According to the state’s Open Records Act interested persons may request public records and be granted. The law provides the public the right to view and obtain available copies of divorce records in the state.

However, sealed records may not be available to the public, they are privileged by the law and are sealed from public view. Available records will also not include sensitive information about the couple. Therefore it may exclude financial inventory, information on minors and other similar information. The public may access divorce case information just like other court case information.

What are the types of Divorce Records available in Oklahoma?

The two types of divorce records that are recognized in the State of Oklahoma include; Divorce Decree and Divorce Certificate. In Oklahoma, court case files for divorce proceedings represent another type of available divorce record.

A Divorce Decree is a type of divorce record that incorporates the final decree of the judge regarding the legal dissolution of a marriage. It is issued after divorce proceedings are concluded and the divorce has been finalized, representing the final order signed by a judge terminating a marriage. A divorce decree contains details of prescribed terms and conditions of divorce which may include;

This document is available to the actual parties involved, direct relatives of the couple, and the legal practitioners involved in the divorce proceedings. They can be requested at the office of the Court Clerk in the county where divorce took place.

There are informational and certified copies of divorce records in Oklahoma. These records are defined based on their function and legal authority.

How Do I Get Divorce Records in Oklahoma?

Oklahoma divorce records are mainly organized and disseminated by the Court Clerk of each county. To obtain a copy of a divorce decree or certificate in Oklahoma, interested individuals may send a request to the office of the court clerk in the county where the divorce process was finalized. The process of obtaining divorce records varies from county to county. Some courts require the submission of a written request containing the names of each party, and the court case number, the year of the divorce.

Eligible persons may obtain divorce records through any of the following means;

Usually, copies of divorce records are provided at a nominal fee for the first page and extra charges may apply if more than copy is requested. Additional fees may also apply depending on whether it is an informational record or certified record that is requested. The method of making payment varies from county to county. Mail-in requests should be sent in a self-addressed stamped envelope alongside a request form or letter. Mail-in requests may take up to 1–2 weeks to process.

Contact information and address of the Court Clerks of each state’s county court can be determined using the OSCN Court System Map.

Unlike some other states that store all vital records with the Department of Health, Oklahoma State Department of Health only provides copies of birth and death records. Divorce decree records are only available at the office of the Clerk of Courts in the county where the divorce was granted. While requesting for divorce records, the following information will be required;

While divorce and marriage records may be searched through government sources and organizations, the availability of these documents cannot be guaranteed. This is also true of their availability through third-party websites and companies, as these entities are not government-sponsored therefore record availability may vary further. Also note that marriage and divorce records are considered extremely private due to the information the records contain, and are often sealed. Hence, bearing in mind that these factors determine the availability of any type of marriage or divorce record.

Who Can Obtain Divorce Records in Oklahoma?

For counties that do not have a case lookup portal on their websites, a request may be made at the office of the Clerk of Court. The courts in more populous counties such as Oklahoma City provide a case search online.

How Do I Seal My Divorce Records in Oklahoma?

For example, if a divorce record reveals certain information that exposes sensitive details on a private property or the identity of children, the judge may approve the sealing of the record, as this is a justifiable reason. 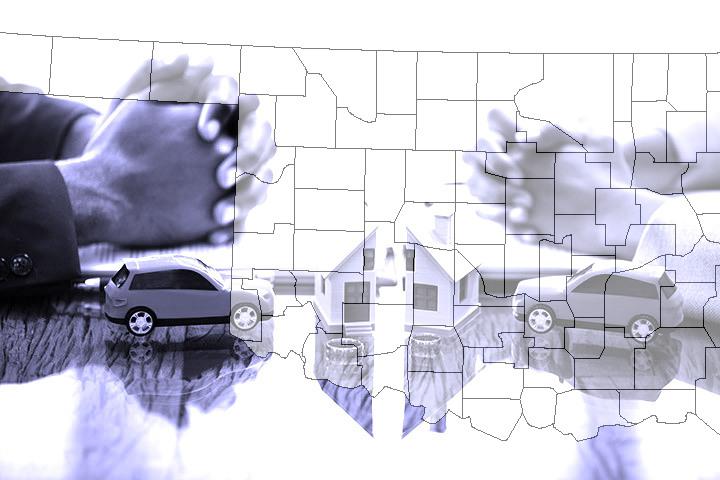