I Agree
How Does The Oklahoma Supreme Court Work? | OklahomaCourtRecords.us
Oklahoma Court Records

How Does the Oklahoma Supreme Court Work?

The Oklahoma Supreme Court has the authority to amend and challenge the state’s constitution. The District Courts, present in all counties, possess general jurisdiction over all forms of violations of the state laws and edicts, including civil and criminal cases. On the other hand, the Court of Tax Review only hears cases or petitions filed with the Oklahoma Tax Commission. Joining the Court of Tax Review at the bottom of the court structure is the Municipal Court of Record and the Municipal Court Not of Record. What differentiates one from the other is the population of the location. There are only two Municipal Courts of Record in Oklahoma because there are only two cities with a population of 200,000 and above, and keep records of all trial proceedings. The Municipal Court Not of Record can be found in all other cities and towns with populations below 200,000 and does not keep records of proceedings.

The Oklahoma State Supreme Court serves as the head of the Oklahoma Judicial Branch. It manages all agencies, boards, and commissions established by law. The Supreme Court also handles other courts present in the state’s court structure besides the Oklahoma Court of Criminal Appeals, which serves as the apex court for criminal matters. Other responsibilities of the apex court include establishing the operation codes or procedures that guide courts’ operations and legal practitioners’ conduct.

Article VII, Section 4 of the Oklahoma Statutes states that the Supreme Court holds appellate jurisdiction over all cases at law and in equity except for criminal cases and retains the power to issue writs of habeas corpus, mandamus, certiorari, and quo warranto. Examples of the cases heard at the Oklahoma Supreme Court includes:

Per Section 2 of Article VII of the Oklahoma constitution, when there is a vacancy in the Supreme Court, the governor appoints a Supreme Court judge from a list of three qualified persons prepared by the Oklahoma Judicial Nominating Commission. For an individual to be eligible, the person must be at least 30 years old and must be a registered voter in the judicial district for at least one year before being considered. Furthermore, qualified aspirants must be licensed legal practitioners or judges in the State of Oklahoma for five years or more and must maintain the license to practice law. Interested individuals can submit names to the Judicial Nominating Commission to signify readiness to serve.

When the Judicial Nominating Commission presents qualified individuals’ names to the governor, the governor has only 60 days to pick from the list. Suppose the governor does not appoint anyone within 60 days. In that case, the Supreme Court’s Chief Justice will choose one of the three nominees and get the appointment certified by the Oklahoma Secretary of State. The judge then goes through a retention vote during the next general election to complete the six-year term. Afterward, the judge is eligible for reelection every six years and must submit the name to the Oklahoma Secretary of State to signify interest again. If the judge loses the reelection or does not want to continue, the Judicial Nominating Commission initiates a search for a replacement.

There is no limit to the number of tenures or years that a judge can serve in office. The Oklahoma State Supreme Court has nine judges, with five judges coming from the five congressional districts in the state while the remaining four serve the state at-large. The chief justice of the Supreme Court is the top-ranking judicial officer followed by the vice chief justice selected by the nine judges for a two-year tenure.

The Oklahoma State Supreme Court is at;

Interested individuals can visit the Clerk of the Court, where the trial took place to obtain Supreme Court records. Although the court is not known in cases, the Oklahoma Judicial Branch has a computerized case management portal to obtain court records electronically known as the Oklahoma State Courts Network (OSCN). Requesting parties can either search using the case number, case type, name of the party involved, or by using the judges’ names that gave an opinion on the case to access records of Supreme Court cases on the portal.

Another option known as the OCIS document index includes all the Oklahoma Supreme Court’s opinions from 1890 till present. It lists the records chronologically. Searches can be carried out on the index using the advanced query editor, which allows the requester to search using a date range, case number, judge, court, and code title. On the whole, Supreme Court records contain details of trial proceedings, judgments, and opinions published regarding each case. Notwithstanding, expunged or sealed records cannot be accessed physically or online, except the Supreme Court permits it. 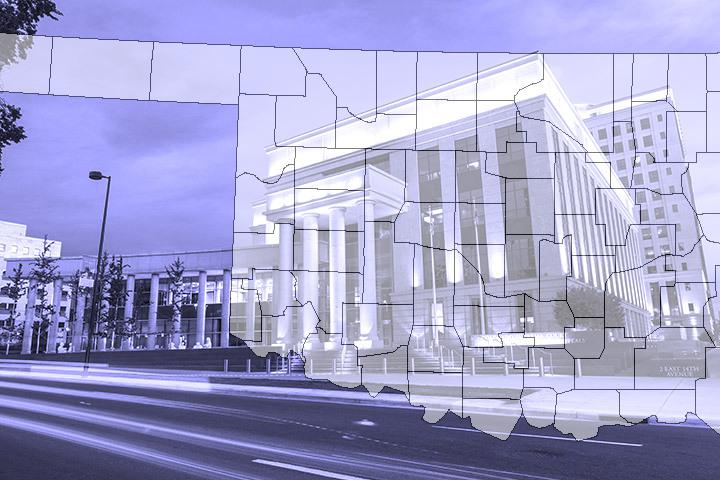