What are Oklahoma Specialty Courts?

Due to civil and criminal cases’ complexity and diversity, Oklahoma developed special court programs running under specialty courts’ jurisdiction. Such courts may also fall under the jurisdiction of district courts. Unlike the conventional court system involving penalties or jail time, specialty courts offer qualified non-violent offenders the opportunity to choose a treatment program to avoid incarceration. These programs are under strict judicial monitoring and involve frequent drug or alcohol tests to boost total abstinence probabilities. Graduates of specialty court programs have exhibited a lower recidivism rate than offenders who completed standard probation or finished a sentence.

Failure to comply with the specialty court program’s terms and conditions may attract the court’s sanctions. Notwithstanding, incentives are also offered to successful participants that adhere to full compliance. According to the Oklahoma Department of Mental Health and Substance Abuse Services, 73 out of the 77 counties in Oklahoma have drug courts. At times, the drug court may not grant admission, and the case will be returned to the initial court to proceed as usual for any criminal matter. The types of specialty courts that exist in Oklahoma include:

Juvenile Drug Court: Under the 2014 Oklahoma Statutes Title 10A. Chapter 2 2–507, a hearing must be conducted to assess a juvenile’s eligibility for the juvenile court program. Other factors considered are:

The juvenile court program takes up to 6 months or less, and it involves screening tests, support groups, and periodic mental assessment.

DUI Court: Traffic infraction offenders are subject to the wrath of the law in a district court. Apart from fines or jail time, violators may also have the driver’s license suspended or revoked. Traffic offenders issued a Driving Under Influence (DUI) ticket by the high patrol in Oklahoma will visit the hearing DUI court. According to the 2014 Oklahoma Statutes Title 47. Motor Vehicles 6–212.2, the completion of alcohol and drug assessment as well as evaluation is required. The statute stipulates that at any point in time an individual’s alcohol or substance-related conviction is reflected upon by the Department of Public Safety (DPS), the offender shall partake in a drug and alcohol evaluation and assessment by the Department of Mental Health and Substance Abuse Services.

The DUI court’s goal is to achieve permanent drug or alcohol abstinent participants through the partnership of relevant agencies such as the Oklahoma Department of Mental Health and Substance Abuse Services (ODMHSAS) and the Department of Public Safety (DPS). A review of criminal history and past drug use or drinking behaviors determines eligibility and referral to the DUI school follows. Accepted referrals will have offenders enrolled in an Alcohol and Drug Substance Abuse Course (ADSAC). To obtain more information, contact the ODMHSAS ADSAC programs on the telephone number (405) 248–9324.

Participants in this program will engage in therapy sessions involving probation officers, mental health providers, and local community representatives. For criminals with an unstable psyche, cognitive treatment is more effective than prison, which is why the state of Oklahoma prioritizes this program for lawbreakers with mental issues. Treatments in mental health programs may include medications, counseling sobriety, and other interventions. Successful participants may enjoy records expungement from the Oklahoma criminal record system for the offenses committed against the state’s law.

Veteran’s Drug Court: Veterans are respected US citizens, and there are over 47,000 active service members who have currently or formerly served in the US military in Oklahoma alone. Asides this, the State of Oklahoma is also home to three air force bases, two army bases, and one Coast Guard Institute. The high rate of Post-Traumatic Stress Disorder (PTSD) and high suicide subject to substance abuse among veterans has led to the creation of this specialized docket, thereby providing a suitable health treatment for the veteran population in Oklahoma. A DD–214 request will be submitted to the Department of Veterans Affairs by the veteran’s drug court to begin a drug treatment program with hopes of leading such veterans to have productive lives.

The supreme court is the highest in Oklahoma’s judicial system, and interested individuals can retrieve records under the supreme court jurisdiction in electronic formats. The case files may contain information on specialty court cases as well.

Remerge: Oklahoma made another specialized docket tailored to the needs of the female criminals who are mothers or are pregnant facing incarceration charges. This diversion program prioritizes an alternative to jail time by addressing mental illness, trauma, and substance abuse. During the treatment process, rewards for participants who display efficacious potentials include employment, housing, and charge dismissal. The remerge program encourages and offers female criminals to avoid prison lockups and make such defendants crime-free and a productive citizen of the United States of America.

Parties can find the locations of DUI, drug, and mental health courts in Oklahoma on the Oklahoma judicial website. 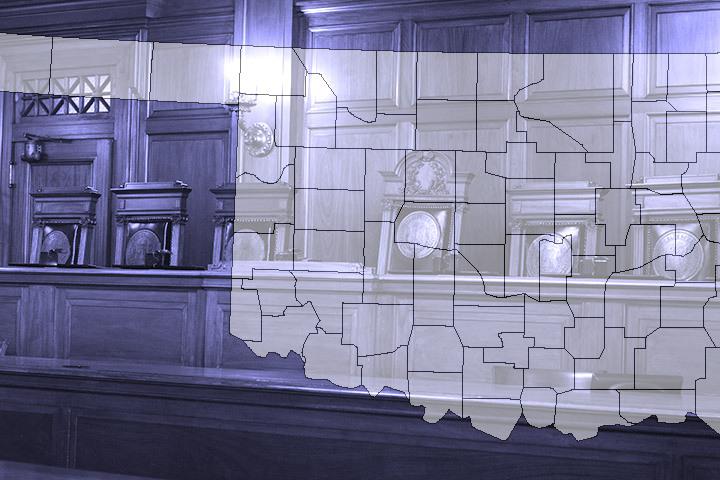