I Agree
How Does The Oklahoma District Court Work? | OklahomaCourtRecords.us
Oklahoma Court Records

How Does the Oklahoma District Court Works?

Under the Oklahoma judicial system, also known as the Oklahoma State Courts Network (OSCN), there are seven court levels. Types of courts include the Supreme Court, the highest court in the state, the Court of Criminal Appeals, the Court of Civil Appeals, District Courts, the Court of Tax Review, Municipal Courts, and the Workers’ Compensation Court of existing claims. These courts serve different purposes and handle diverse cases. The Oklahoma District Court uses procedures outlined by the Court Administrator’s Office, The Supreme Court of Oklahoma, and the State Auditor and Inspector. Section VII–7 of the Oklahoma Constitution states that “there shall be one District Court for each judicial district, which shall have such number of District Judges, Associate District Judges, and Special Judges as may be prescribed by statute.”

Oklahoma district court judges are elected in a non-partisan manner to serve a four-year term except for special judges appointed by the district judge to assist with case overload. Candidates seeking to be a district judge must either be practicing law in the state or have been lawyers or judges for four years in the district. The aspirant must have been practicing law for at least two years in the state for associate judges.

Generally, when there is a vacant position at any district courts, the governor can appoint from a list of three applicants submitted by the Judicial Nominating Commission. Upon the attainment of the age of 60, judges can retire and begin receiving full retirement benefits. Other district court members include the court administrator, the court clerk, the court reporter, and the judges’ support staff. In most cases, the court reporter has specific responsibilities, such as:

Cases in the Oklahoma district court can take up to three months to two years to conclude. Locating and accessing court records is a benefit from the provisions of the Oklahoma public records act. With an exception to sealed records, anyone can request a public record without giving a reason, and there are no existing restrictions for the use of these records. Interested persons can access district court records online or at the court that heard the case. Oklahoma offers online access to civil, domestic, and criminal matters. The court computerized all court files, including confidential records, in 1989 and 1997. Parties can access records created before 1989 in docket books from the Court Clerk for a nominal fee.

Specific Oklahoma Counties offer online access to view court records and dockets. For example, Oklahoma County provides an online Request for Court Records form. Parties can fill out and submit this form electronically for free. After ten days, the court clerks will contact the party to report the party’s fees to the court. Parties can pay these fees by check or money order. The court will not accept payments made by cash or debit or credit card. After payment, the processing time for court records typically takes up to 10 business days. Fees for district court records vary by county. Typically, the price is $1.00 for the first page and.50 cents for each additional page. It costs an extra.50 cents each to get a document certified by the court, and authentication costs $5.00.

Court Clerks, referred to as Court Administrators, are Constitutional officers of the court, elected to serve four-year terms. The Court Clerk is responsible for recording, filing, maintaining, and disseminating records generated due to court processes. When parties pay fines, bonds, or request documents, the Court Clerk collects the fees to the Court Fund and distributes the money to the designated entities. The Court Fund allows the Court Clerk’s office to function.

Parties can find the locations of all district courts in Oklahoma by visiting the Oklahoma judiciary website. 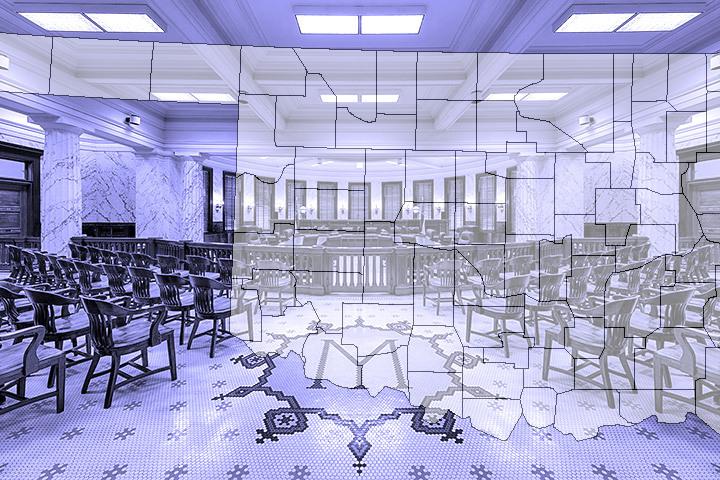