What are Oklahoma Small Claims Cases and Class Action Lawsuits?

Under Title 12 of the Oklahoma Statutes (Civil Procedure), Oklahoma makes provisions for aggrieved persons in a minor case to seek compensation from the district court up to $6,000. A small claims lawsuit includes breach of contract, a small monetary dispute, property recovery, or other damages. On the other hand, a class-action case is a civil action involving a large number of people against an entity. A class-action lawsuit seeks to respond to a similar injury that many people have suffered to provide a form of compensation.

What is a Class Action Lawsuit in Oklahoma?

According to Title 12 of the Oklahoma Statutes, a class action is a lawsuit filed by a representative for many people who have suffered similar injuries, and filing individually will be impracticable. At the court, the petitioner must represent the interest of the class. According to §12–2023, the class action must include many members and the fact of case but be common.

How do I File a Claim in a Oklahoma Small Claims Court?

To file a small claims lawsuit, interested individuals can obtain an affidavit from the clerk’s office at the district court. The affidavit will contain the name and address of the plaintiff and the defendant, the reason for the suit, and the amount for compensation. Complainants that cannot afford the filing fee can use the Pauper Affidavit can be used instead.

Copies of the completed affidavit filed will be served to the defendant by mail or by the sheriff. After this, the defendant will submit proof of service at the court and file a countersuit against the plaintiff. At the hearing, the judge will make a decision based on the evidence and testimonies. The losing party in the lawsuit can then appeal the decision of the court to a higher court.

Do I Need a Small Claims Lawyer?

Small claims court offers simplified procedures, making the legal process less tedious. Hence, an individual in a small claims case can proceed by self-representation as these proceedings tend to be less formal than other kinds of court proceedings. In Oklahoma, all parties are entitled to be represented by an attorney in every case, according to Title 12 of the Oklahoma Statutes.

When the claim is against a corporation or government entity, it is advisable to hire an attorney. A lawyer has extensive resources to investigate and prove claims and possesses a great wealth of experience in handling similar cases. This increases the suitor’s possibility of winning the case. The petitioner can also claim attorneys’ fees as a part of the settlement.

How do Class Action Lawsuits Work in Oklahoma?

The first step in filing a class-action lawsuit in Oklahoma by completing an affidavit. The form will include the plaintiff’s name, address, defendant’s name, the reason for suing, and the settlement fee. The court clerk then goes ahead to set the date and time for the hearing within 60 days. Emergency and eviction cases are heard in five days and not more than ten days after filing.

Is a Class Action Better Than a Single Party Suit?

There are various advantages for plaintiffs who wish to seek a class action instead of filing independently. One significant advantage of a class-action lawsuit is that it is affordable because litigation costs are shared among all plaintiffs. In addition, class action tries to guarantee that all offended parties get some remuneration, regardless of whether it is sufficient to completely cover the harm or not.

Records that are considered public may be accessible from some third-party websites. These websites often make searching more straightforward, as they are not limited by geographic location, and search engines on these sites may help when starting a search for a specific or multiple records. To begin using such a search engine on a third-party or government website, interested parties usually must provide:

Third-party sites are independent of government sources and are not sponsored by these government agencies. Because of this, record availability on third-party websites may vary.

What Cases are Heard by Small Claims Courts in Oklahoma?

The district courts in Oklahoma hears small claims cases such as; 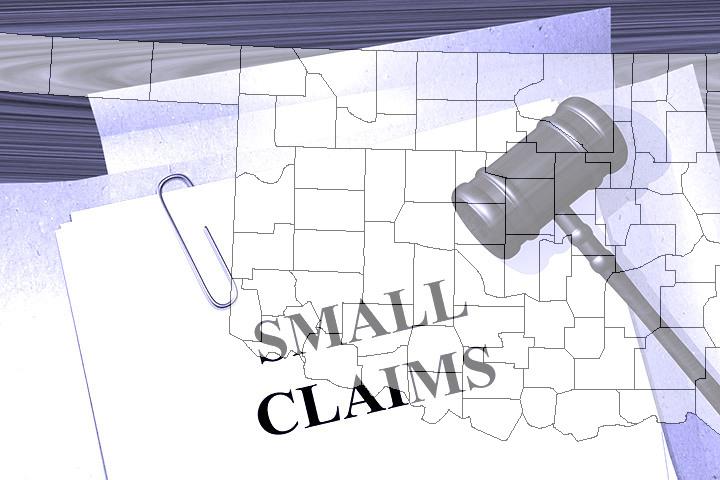